Have you ever wondered where corn comes from? The long history of corn in the United States dates back to ancient civilizations, and today, it remains one of the most important crops in the world. Corn is America’s second-highest export, generating around $9 billion annually, so it plays an enormous role in our country’s infrastructure. The success of corn crops is intimately tied to many other aspects of the American economy.

To learn more about this essential plant, its uses and how it is harvested, continue reading this brief history of corn farming.

What Is Corn and How Does It Grow?

Corn is a cereal grain identifiable by its long stalk, upper tassel and ears of corn. The ear of corn holds the kernels and cob, surrounded by the silk, which is what initially helps pollinate the plant. The kernels often have distinctive colors, such as black, blue, purple, red and, of course, yellow. Planting season for corn falls around spring, after the last frost. Harvest time is usually from late summer to early fall.

Corn is a staple crop around the world and can be found in the diets of people from hundreds of different countries. It’s so prevalent that it’s responsible for 6% of all calories consumed worldwide. In the United States, it’s the most important crop. The corn belt in the United States, comprising states like Indiana, Iowa and Illinois, is renowned for high yields of corn crops.

Corn is grown from 58 degrees north latitude in Canada and Russia to 40 degrees south latitude in South America. It grows on every continent except Antarctica and is an ingredient in over 4,000 everyday grocery items. Some of the most common uses of corn include:

Corn can also be used for decorations, especially around the American holiday of Thanksgiving. You might see dried, colorful ears of corn with pale yellow husks on doors or even on table settings. Additionally, there are many crafts and decorative items you can make with woven corn husk. 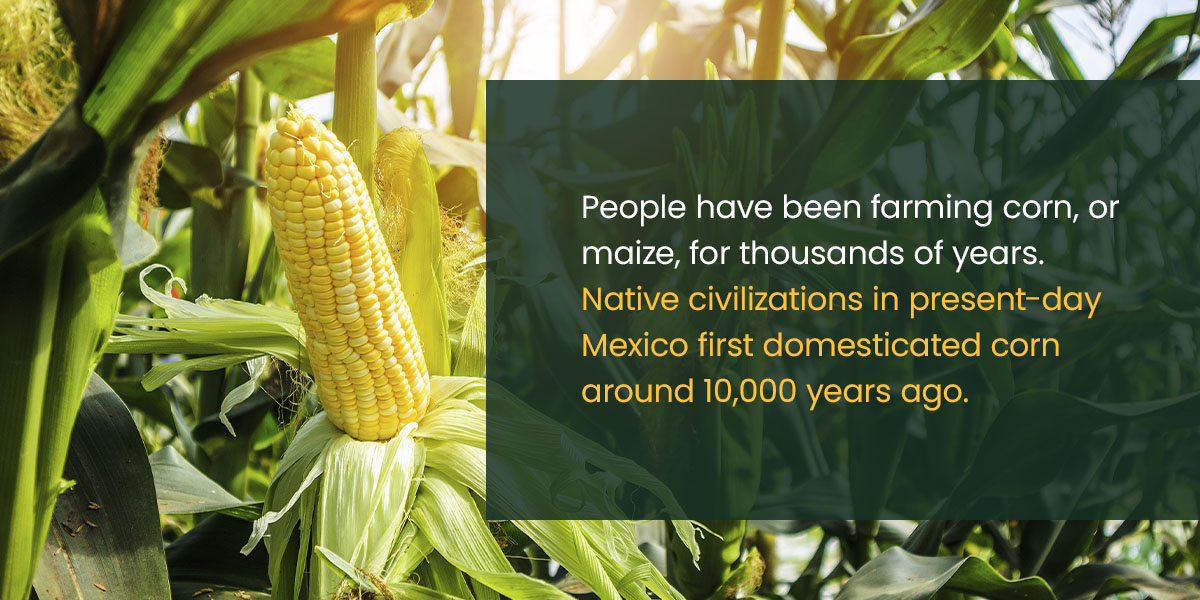 The Early Days of Corn Farming

People have been farming corn, or maize, for thousands of years. Native civilizations in present-day Mexico first domesticated corn around 10,000 years ago. These civilizations began domesticating a grass called teosinte, which has few similarities to the modern-day ears of corn you see in the grocery store. From a small cob with a few kernels, the peoples of this region were able to transform the plant through domestication and selecting favorable traits. Eventually, teosinte was transformed into the tall, tasty and tender corn crop we use today.

As the plant was domesticated, it also traveled. With their extensive trade networks, Native Americans had spread the plant as far north as Maine by the time European colonists arrived. In addition to the kernels, they had various uses for the stalks and husks of the corn plant, such as braided corn husk mats, chairs and even dolls. As the Native Americans continued to trade corn, they also developed and strengthened the growing practices, which the tribes eventually shared with the New England colonists.

In fact, corn has a significant place in the story of the first Thanksgiving. With food supplies running low and winter coming quickly, the Native Americans’ kindness in teaching colonists how to grow corn saved their lives and ensured they would not starve during the winter. When the first crop was a success, the colonists’ leader invited the Chief of the Wampanoag to a feast to celebrate. While we don’t know exactly what was on the menu, corn was most certainly a large part of the meal.

Eventually, the colonists became master corn growers and, in the spirit of continual improvement and ingenuity, developed new and quicker ways to grow and harvest corn.

How Corn Farming Has Evolved

Corn began, of course, as a crop harvested by hand. Initially, one bushel of corn took about 20 hours of labor to produce. Corn seeds were planted by hand in tilled earth, and in between rows of corn, Native Americans would plant complementary crops like squash and melon. They then dried the corn for use in cooking and developed ways to safely store corn throughout the winter and protect it from pests and mildew.

When the colonists learned how to grow corn, they too developed different practices. Corn production grew astronomically due to a few landmark agricultural developments:

Today, yields of corn are measured in the billions. In 2020 alone, the United States produced at least 14.2 billion bushels of corn. Because of the evolution of pollination practices, research in genetics and technological advancements that assist in the planting, growing, harvesting and tracking of corn yields, we can produce more corn than at any other point in history. 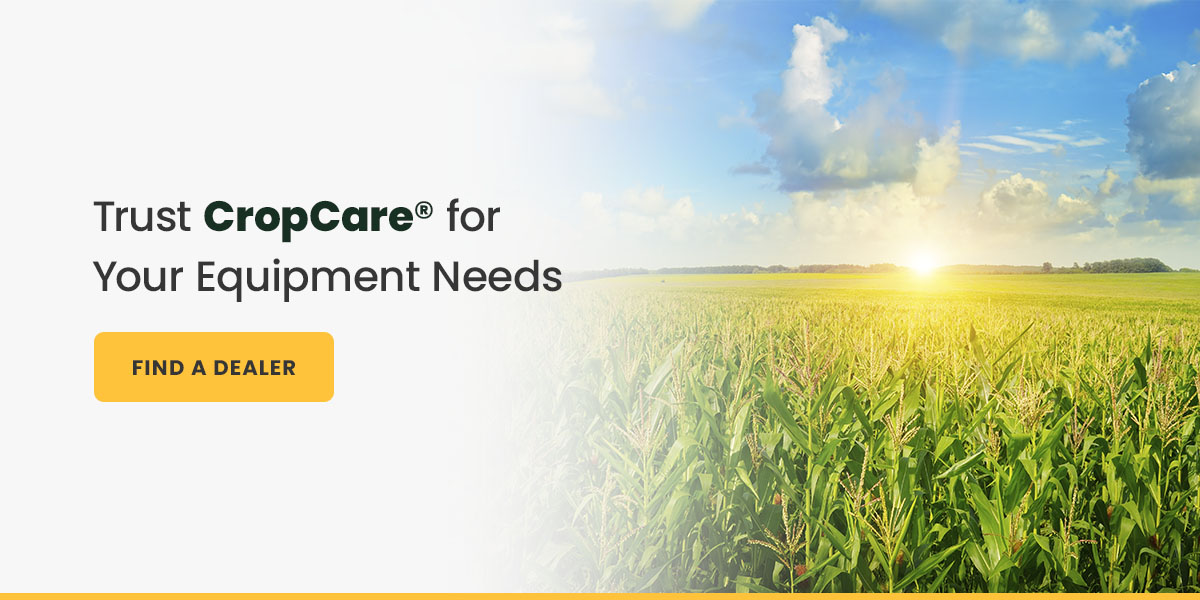 Trust CropCare® for Your Equipment Needs

As a trusted source in farming for over 70 years, CropCare® has the equipment you need to increase yields and productivity on your farm. We build quality agricultural sprayers and specialty vegetable equipment that will last. With both standard and built-to-order options available, you can get exactly what you need so you’re only paying for the equipment you want.

Contact our team to learn more about our equipment or to get a free quote.